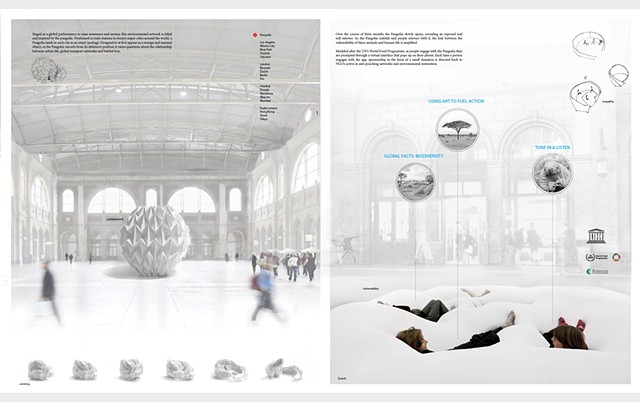 Left: Staged as a global performance to raise awareness, this environmental artwork is titled and inspired by the pangolin. Positioned in train stations in twenty major cities around the world, a pangolin lands in each city as an intact ‘package’. Designed to at first appear as a strange and unusual object, the pangolin unfolds, raising questions about the relationship between urban life and habitat loss.

Right: Over the course of three months the pangolin slowly opens, revealing a vulnerable and soft interior. As the pangolin unfolds and people interact with it, the link between the vulnerability of these animals and human life is amplified.

Modeled after the UN’s World Food Program, as people engage with the pangolin they are prompted through a virtual interface that pops up on their phone. As engagement increases, sponsorship funnels funds back to NGO's in the form of a small donation to increase environmental restoration and anti-poaching programs in local areas.