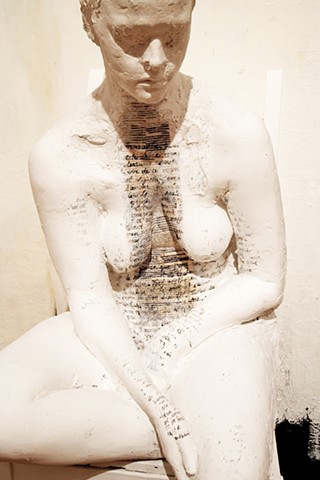 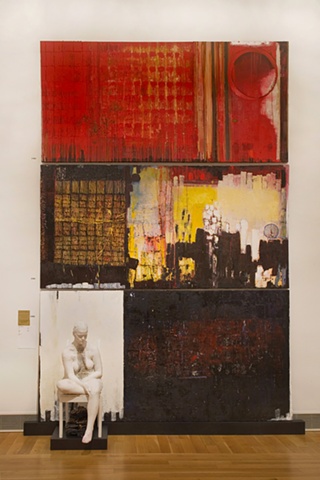 Each painting in this series is based on one of Margaret Atwood’s novels: The Edible Woman, Lady Oracle and Alias Grace.

This series bears the mark of struggle to find a metaphor for the relationship between women and creativity, the choices creative women make between creative lives and more readily acceptable ones, and a sense of belonging and home.

The characters in Atwood’s novels are not your typical heroines. They are often up to no good. In The Edible Woman, Lady Oracle and Alias Grace each protagonist leads a double life, one acceptable and expected, the other subversive, underground, unpredictable, often bad – but creative.

My interest in Atwood as a writer is twofold. On the one hand as an artist her work offers a sense of grounding in something identifiable, and on the other, her works are a type of road map for how women belong to creativity. This tension is at the heart of these works.

On my work, the void, and belonging and the city:

Entredeux – working in the space of otherness September 17, 2013, Marginalia

I discovered Cixous about four years ago. I loved her writing for her ability to invoke the body in language. The physical seeps through her work – at first less intellectual, but through her poetry, more so. Eventually, I became most interested in her meditations on the city, and her ability to articulate the spaces in-between things where boundaries and edges often meet. At the time her work served as a metaphor for experiencing a new city for the first time, and feeling outside of it. In her incantation of entredeux, I found a metaphor for occupying this in-between space, where one isn’t really here, or there, or wholly occupying one mode of being, but existing somewhat suspended between two places:

“The word entredeux:… it is a word… to designate a true in-between – between a life which is ending and a life which is beginning. For me, an entredeux is: nothing. It is because there is entredeux. But it is – I will go through the metaphors – a moment in life where you are not entirely living, where you are almost dead. Where you are not dead. Where you are not yet in the process of reliving. These are the innumerable moments that touch us with bereavements of all sorts…. It is, frightfully, all new: this is one of the most important experiences of our human histories. At times we are thrown into strangeness. This being abroad at home is what I call entredeux. – Cixous